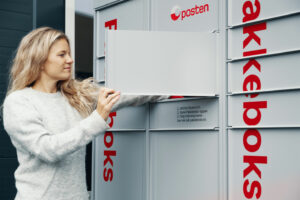 The Norwegians have been overwhelmingly positive of Posten Norge’s parcel locker network. Around 95% of all pick-ups in parcel lockers are rated as a positive experience. The reason behind this success is simple: convenience throughout the nationwide solution.

In January 2020 the first Infinity lockers in Posten Norge’s parcel locker network, called Pakkeboks, was installed. Since then, the nationwide network (which by the end of this year will amount to around 3,000 lockers) has been monitored closely, as the lockers was a new way of picking up parcels for Posten Norge’s customers.

Since the locker solution was deployed, data has especially pointed out that one of the main reasons for the customers’ enthusiasm is the fact, that the lockers are placed where the customers have their daily life. They don’t have to travel far to pick up parcels, as the locker network is so dense.

Camilla de Verdier from Posten Norge explains: “It was central for us to find a flexible solution that supported our vision of operating with a dense parcel locker network, that could cover all of Norway, in order to support our customers’ needs. With the Infinity solution this became doable. Our customers really embrace the possibility of picking up their parcels when and where it suits them – so the accessibility really drives the success. That our customers also find the app solution very intuitive to navigate in is just another great finding.”

It’s SwipBox who is the supplier of the innovative Infinity lockers. Using these lockers, the customers are not picking up their parcels via a PIN code to be typed on a screen – they simply utilize their own smartphones in order to connect with the lockers and pick up their parcels. The lockers run on batteries and are not using WIFI, which means they can be placed everywhere. It only takes around 5 minutes to install a Infinity parcel locker, which means it’s very fast to scale up the solution.

“We are extremely aware of the fact that online shopping is exploding, which means that end users demand solutions that supports their new way of shopping – and at the same time is Covid-19 safe when picking up their parcels. With Infinity we offer a solution, that is so flexible and intuitive, that it can be placed everywhere close to the end user’s life. It really emphasizes the convenience in this solution when data also highlight that regardless of age, experience with pick-ups in parcel lockers in general or familiarity with handling a smartphone it’s very easy for the users to pick up a parcel in an Infinity parcel locker”, Brian Jonasson from SwipBox says.