Growth potential for ecommerce in Nordics

The Nordic countries of Denmark, Finland, Norway and Sweden were very early adopters of the internet and have a highly developed digital infrastructure. Online shopping is very common in the Nordics, yet research reveals that there is still growth potential in this region.

In 2021, for example, Finland was number one in DESI, the European Commission´s Digital and Society Index. This means that the country is considered as the most mature digital economy in the EU. The other Nordic markets also rank at the top of the index. The percentage of the population who shop online is over 90 in all the Nordic countries.

‘Finland is considered as the most mature digital economy in the EU.’

PostNord and Direct Link have published the E-commerce in Europe 2021 report, where many similarities in terms of ecommerce consumer behavior and preferences between the Nordic countries are seen. The four Nordic countries have the highest proportion of consumers shopping from abroad when compared to all twelve markets studied in the report. Another similarity is that they all have German fashion online retailer Zalando as number one when it comes to marketplaces they make purchases from.

The Nordic countries have quite a lot of strong domestic brands, and large marketplaces established themselves later in the Nordics than in many other European countries. The number of consumers who regularly shop on marketplaces is growing, but is still significantly lower than in countries such as Italy, the UK, Spain and Germany. Amazon who has been a large player in several European countries for many years, has so far only established itself locally in Sweden among the Nordics.

Payment preferences in the Nordics

How Nordic consumers want to pay for the purchases they make online varies a little. Debit cards or credit cards are the most preferred payment method in Denmark, Norway and Finland. In Sweden, invoice is still the most popular way to pay. Digital payment methods are not yet as popular in the Nordic´s as in other European countries. Mobile applications, often local banking partnerships, on the other hand are growing quite rapidly in popularity in the Nordic countries.

Using a mobile phone when shopping online has gone from being a niche phenomenon to becoming mainstream during the last years. The differences in mobile usage between the European countries studied in the report have levelled out, with all markets reporting that more than 70 percent of respondents use their mobile phones for ecommerce. Sweden tops the Nordic league with 79 percent of the consumers using their mobile phones.

Consumers in the Nordic countries stand out when it comes to how they want their online purchases to be delivered. In a clear majority of the markets studied in the report, consumers prefer to have their online purchases delivered to their homes. In Sweden and Norway, the first choices among the consumers is delivery to mailbox, when possible, and to pick up the product from a service point.

‘In Finland, consumers prefer collecting their orders from a parcel locker.’

In this respect, the Finns stand out to an even greater degree. Consumers here are the only ones in the survey who hold collecting from a parcel locker as their number one preference. And it seems like the interest for this delivery option is steadily increasing in the Nordic countries.

More parcel lockers in the Nordics

These results are interesting for online stores within the Nordics, but PostNord itself is also planning to take advantage of them. The company has plans to roll out a large number of parcel lockers in the Nordic region in the near future. The plan is to have 4,500 machines in Sweden by the end of 2022, covering not only larger towns but also rural areas. PostNord will place around 3000 lockers in Denmark and in Norway the ambition is to have 1,500 lockers throughout the country by the end of 2022. In Finland, PostNord currently delivers to shared network lockers but the plan is to have 600 own lockers over the course of 2022. 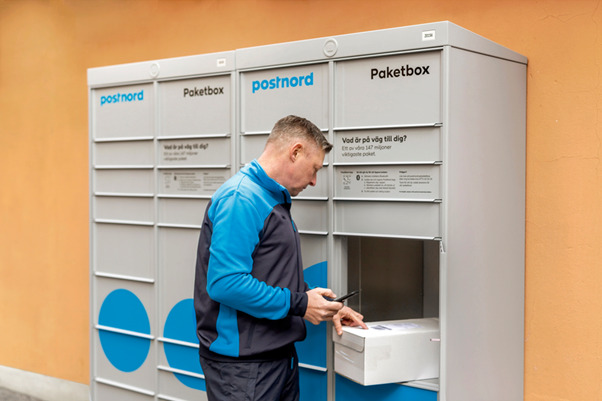