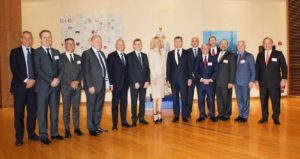 On 19 October, PostEurop and 11 CEOs of European national postal operators met with Andrus Ansip, Vice-President of the European Commission for the Digital Single Market. This was part of a regular dialogue between the European Commission and postal operators. Today’s constructive discussion covered developments in the parcel delivery and e-commerce markets, and how the posts are introducing new products and services to meet consumers’ demands, as well as the proposed cross-border parcel delivery regulation.

European national postal operators showcased to VP Ansip innovation and investments made to match the needs of small and large e-retailers, and consumers for fast, traceable and efficient parcel delivery, domestic and cross-border.

After the meeting, Jean-Paul Forceville, Chairman of PostEurop commented:

“PostEurop’s commitments to enhancing interoperability and facilitating cross-border flows of parcels to meet consumers’ demands work all year round. Efficient and more convenient parcel delivery fuels the growth of e-commerce across Europe. Our sector is subject to strict regulatory scrutiny, overregulation must be avoided.”

The 2017 edition of the Commission’s EU Consumer Conditions Scoreboard showed that the number of consumers reporting issues with cross-border delivery has declined significantly. This has contributed to a highly increased trust in e-commerce (Commission Press Release on 25/07/2017): nearly 60% of European consumers felt confident about purchasing online goods and services from traders in another EU country, a substantial rise of more than 20 percentage points since 2014.

PostEurop is the trade association representing European national postal operators, which are either partially state-owned or used to be state-owned. It has 52 members in 49 countries.

European postal operators are present in all 28 EU Member States and in EEA countries. They serve 175,000 retail outlets, employ 2 million people, operate 600,000 access points and account for 1 percent of the EU’s entire GDP .

Parcel delivery is a cornerstone of the fast-growing e-commerce industry, domestically and cross-border, and a crucial pillar of the EU’s Digital Single Market. Postal operators connect SMEs and e-retailers with citizens across Europe – from London to Bucharest, from Lapland to the Greek islands.

Every year, e-retailers and customers deliver 4 billion parcels through the post to their customers, friends and families across Europe. This represents 11 million parcels a day, on average. Many more parcels are also delivered through the many alternative providers competing with postal operators.

For more information about how postal operators contribute to the growth of e-commerce in Europe, visit our website: www.Deliver4Europe.eu
We are also happy to engage with you on this topic on Twitter: @Deliver4Europe