Deutsche Post equals its own record in parcel delivery volumes 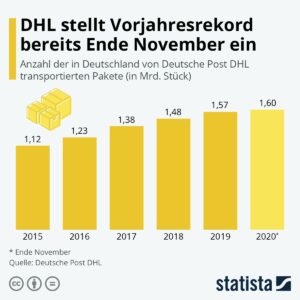 Deutsche Post has already shipped 1.6 billion parcels in Germany this year, breaking last year’s record even before the hot phase of the Christmas business. Deutsche Post expects a year-on-year increase of almost 15 percent for 2020 as a whole. This would correspond to a total of around 1.8 billion parcels.

Amplified by the Corona crisis, parcel volumes in this year’s pre-Christmas period will also be much higher than in previous years. From the end of November until Christmas, the company is expecting new record volumes with more than 11 million shipments on peak days compared to an average of 5.2 million parcels on ordinary days.

Deutsche Post prepared early on for the increasing parcel volumes and already hired around 4,000 new employees during the first corona lockdown in April. By the end of the year, around 10,000 additional temporary staff will support delivery and sorting. More than 13,000 extra vehicles will then also be in operation. A new feature this year is that smaller parcels will be handled by letter delivery in order to cope with the volumes. In addition, Deutsche Post is working with several shifts  throughout the day, so that deliveries will take place more frequently in the evening in some places in the coming weeks. One of many additional measures is that the company is using parcel buses to acceptance and delivery points for parcels in Berlin, for the first time.